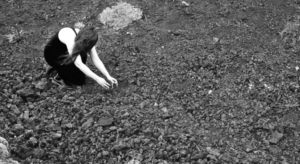 Monade Li is a French artist and educator working with the media of video, photography and collage. The artist evolves at the border between visual arts, performance and music. She explores the duplication of the body and its confrontation with landscapes. She leads Monade Art Residency (workshops for creation and research) since 2022.

Duplication leads to disappearance:
Her first self-produced experimental art video, an underwater shooting by day, “Diatomée” turned into a ‘corps-métrage’ (« body- measurement ») concept. Then came out “Claire Obscure”, an underwater shooting by night and “Malojá”, originally scored by Steven Severin (Siouxsie and the Banshees, The Glove), shot by the sea shore.
Her debut films’ triptych was done.

In homage to Bergman’s film «Persona», her fourth shortfilm shot in South of Iceland, called “Candice”, scored by Steven Severin featuring Julia Kent on cello, was presented at « Air d’Islande » festival in Paris, in Hong Kong and also in Orkney in 2015.
During her stay in 2016 at ArtsIceland residency in Ísafjörður, she worked on an experimental shortfilm titled « Hollie », scored by the epic musician-performer Dirk Ivens; it is an homage to the Icelandic painter Georg Guðni and based on « Gotuljod / Poème de la rue » by the Icelandic author Sigurður Pálsson. Hollie was in competition at « Festival du Nouveau Cinéma » in Montreal in 2017 and also at « Bideodromo » festival in Bilbao in 2018.

The encounter with the Icelandic culture and people in 2013 led her to do some more research on the Icelandic literature and art for her experiments.
Monade Li is currently showing her art video called « The Selkie », which is based on a mysterious seal woman legend. The premiere happened in Akureyri, Iceland, in October 2019.

With « Candice », « The Selkie » and now her new art video « DEIRDRE », Monade Li questions the duplication of each thing that leads to disappearance. She works on how the body reappears as a landscape and brings to light specific woman’s metamorphosis.